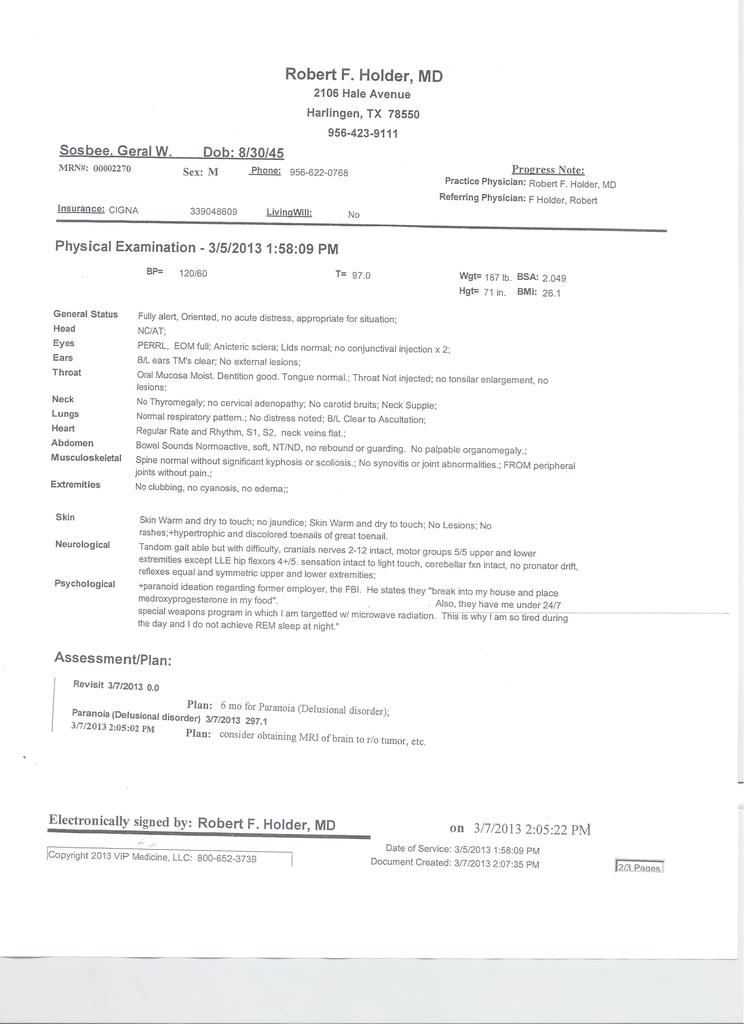 The medical report is also shown here:
http://www.sosbeevfbi.com/part20-updatefor.html
From Harlingen, Texas March 17, 2013
This medical update is provided for two primary purposes:
1) assist all Targets of inhumane DEW and related attacks, so that each person so affected can fully realize the threat of misdiagnosis posed by some medical professionals
2) to provide a record of the utter failure of the medical community to provide a presumption in favor of the patient ( a victim of high tech and other disturbing assaults) that in fact his condition and symptoms do not constitute, nor indicate, any form of paranoia.
---------                                                                  ----------
As shown in the medical report attached hereto, I presented for a routine medical exam on March 5, 2013, to Dr. Robert F. Holder of Harlingen, Texas. [I am referred to Dr. Holder by Dr. Asase who saved my life and who has the highest praise for Dr. Holder. ]
I explained to Dr. Holder some of the symptoms related to DEW assaults and I briefly outlined my belief that the fbi is engaged in a high tech vendetta against me for reporting their crimes to the US Congress. I stated that sleep deprivation and related crimes against my person by government thugs are causing many medical symptoms
(See: http://www.sosbeevfbi.com/part19-updatefor.html ).
Dr. Holder entered his findings in his report which is comprised of three (3) pages; I edited and patch worked the relevant portions of his report for this update, so that one page of his report is shown here. The exam took place on the fifth of March, 2013, but on the seventh of March, 2013, the doctor revisited his medical chart to add the finding of "Paranoia Delusional Disorder" ( see bottom of the above report).
I believe that the doctor is probably an excellent physician (unless the reader infer otherwise) and I hope that all medical doctors will better inform themselves of the need for patients to feel free to accurately report high tech assaults against them without concern that the doctors may incorrectly enter a startlingly false 'psychiatric diagnosis.' I also believe that Dr. Holder may have read some of my reports on line and that perhaps such a reading tended to confirm in his mind his initial incorrect determination on March 7, 2013
This report is not intended to disparage any person, and in time I trust that government officials and professionals in medicine, dentistry and law (interalia) will become truthful in dealing with some of the most urgent high tech (DEW) issues of our time. Otherwise, actual delusion sweeps over the world within the ranks of the very intellects we all look to sometimes for guidance and/or assistance.
Any person who calls another person delusional must take care that such name calling may reflect a de facto delusional state with respect to complex matters outside of the immediate expertise or experience of both the layman and the doctor.
Related:
http://sosbeevfbi.ning.com/forum/topics/report-on-fbis-criminal-acts
ADDENDUM:
From the above report the following observations are recorded:
I was accompanied during the entire exam with a *family member; at no time did  I, nor the doctor suggest 'paranoia'  as a focus of the exam; I never used the following  words and phrases entered in the report by the doctor: " special weapons, break into my house, radiation, great toenail". The finding of a problem with the 'great toenail' is false, as no problem exists (nor ever has existed) with that toe. A small toe has a slight dermatological  problem.Finally, prior to and after the exam with Dr. Holder, the fbi increased DEW assaults on me to an extreme level.
For evidence to support many of these observations see three (3) page medical report from Dr. Brian ODonnell, MD, Harlingen, Texas, dated 3-21-13.
Summary at bottom of page here:
http://www.sosbeevfbi.com/part20-updatefor.html
----------------------                             ----------------------                 -----------------------
*On the day following Dr. Holder's exam of me (3-6-13) he conducted a separate & private exam of that same family member mentioned above and he assumed the role of Inquisitor as he asked the following question: "What do you think of geral's statements about the fbi?" Note that such a question deviated from the medical exam and also note that the fact of the fishing expedition was not included in the doctor's reports on either patient.
Related Topics:
http://www.surveillanceissues.com/links.htm
Unbalanced mind of those who accuse others of same:
http://www.sosbeevfbi.com/pagea18.html
******************************************************************
For evidence of fraud by a different medical doctor, see:
http://www.sosbeevfbi.com/letterformthemed.html