Hitler’s  Mengele made the statement (shown below) which is now also the implied predication  by the fbi,cia,nsa,dod to me and to many others globally.  The stakes were high then in Nazi Germany and today are  even higher: the total subjugation of mankind, the manipulation of the destiny of the human species, the permanent control of and power over earth and space, and the permanent removal of any competing agenda or political/religious/original dogma. 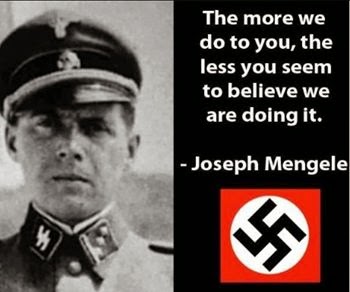 The fbi is to the United States of America the same subhuman force that the Gestapo was to Nazi Germany.  Gestapo, aka, Geheime Staatspolizei, "Secret State Police" was the official secret police of Nazi Germany and German-occupied Europe.

The fbi and the cia now secretly occupy the USA and seek to control the world through inhumane murderous *methods and, as they are maniacal serial killers, torturers and mass murderers, they must be **put out of business.

More papers on topic on behalf of Everyman of conscience who yet has good will toward fellow man, even as the United States of America programs the world’s population to be brutal and homicidal toward one another:

Fbi/USA crimes against humanity viewed by the mind controlled and often insane public as virtuous:

Many  crimes in the USA are actually provoked, caused, or committed by *fbi,cia,police,uspi,, dps,nsa,prosecutors,etc , and are encouraged & covered up by **US CONGRESS and SCOTUS. See the following links if one be interested:

Fraudulent investigation and assaults against me by multiple foolish and dangerous cops:

In honor of all so - called outlaws who are currently tortured, imprisoned, murdered by cops/fbi: You are ironically among the few who understand the injustices and the evil of our times.

The SCOTUS has become the primary tool of the intelligence and police communities to corrupt all laws as needed, to authorize murderous actions by the enforcers of the police state USA, and to set itself up and overlord supreme on earth and in space.

While I was being tortured by the hounds from hell in the fbi, I managed with great difficulty and pain to climb the stairs to the SCOTUS, to present my case to the little ‘justices’ there, and to survive attempts on my life and sanity all the while. The SCOTUS, therefore, can never be forgiven for its role in the Gestapo type society which is forged here by the fbi; and the statement by Mengele (quoted above) is attributable to SCOTUS equally as it is attributable to the fbi/cia/police/nsa/dod, etc. See Also: My Story In Detail in twenty parts: http://sosbeevfbi.com/mystory.html


The following Indymedia blocks publication of this post:
https://linksunten.indymedia.org/en/node/144249