Some examples of fbi crimes against me and others 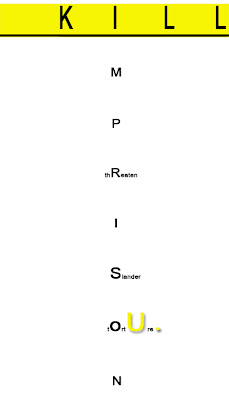 In reference to the report on "Not A Grimm Fairy Tale" shown here
http://sosbeevfbi.ning.com/profiles/blogs/not-a-grimm-fairy-tale?xg...
the following data reflects some of the activities of the fbi's own employees, special agents, high tech experts, street thugs, etc. who engage in an assorted variety of felonies against SOSBEE; all such crimes are applauded by that section of the general public who assists the fbi in the heinous plots to torture, terrorize and kill him.
1)
Suffocate SOSBEE as he is being treated in a hospital for a Service connected injury:
http://sosbeevfbi.ning.com/forum/topics/fbicia-methods-to-torture-and
2)
Manufacture a synthetic kidney stone by chemical combination in the person of SOSBEE in efforts to maim or to kill him
http://www.sosbeevfbi.com/part16-updatefor.html
3)
Plant a bacterial infection in an area that is likely to reach the brain in efforts to kill SOSBEE:
http://www.sosbeevfbi.com/tooth14.html
4)
Cause a malignant cancer by microwave assaults in efforts to kill SOSBEE:
http://www.sosbeevfbi.com/hightechassau.html
5)
Attack SOSBEE relentlessly with directed energy weaponry (DEW) using extremely low frequently sound waves (ELF) in order to incapacitate SOSBEE, to destroy his hearing, and to predetermine his waking hours
6)
Use a medical doctor to label as paranoid and delusional any effort by SOSBEE to report the atrocities:
http://www.sosbeevfbi.com/part20-updatefor.html
7)
Meanwhile, the fbi sends an assassin on line to accuse SOSBEE  of being a murderer and a possible mass murderer:
http://austin.indymedia.org/article/2014/03/01/cointel-program-fbi-...
8)
Pump toxic fumes into the residence of SOSBEE, causing him to suffer an attack of acute bronchitis and forcing him to permanently vacate his home:
http://sosbeevfbi.ning.com/profiles/blogs/fbi-crimes-against-mypers...
9)
Commit a federal crime and plant the name of SOSBEE at the scene, so that high level cops come to SOSBEE'S home to threaten him and his wife with arrest:
http://sosbeepolice.blogspot.com/2013/05/evidence-of-planned-coordi...
-------------------------------------------------------------------------
Additional crimes by fbi against me  by fbi as authorized by a corrupt and homicidal federal judge/magistrate :