Some with PHD, MD may harm you.

Stay away from PHD, MD who claim specialty in psychiatry/ psychology because they are mostly frauds who mostly want your money. With your personal information these tyrants (with licenses to control you)

may also * blackmail you.

They often have criminal intent to the extent that they serve the fbi, etc. They cannot help you.… Continue

Listen Up, boys & girls: the police and fbi have this insane notion that they are above the laws of violence, assault, battery, stalking, slander, provocation, murder, assassination, terrorist assaults, etc. In other words these fools in blue with their badges, side arms, shotguns, machine guns and deadly batons, strangle holds, fists of iron, and various and sundry other torture and killing devices imagine that they have the legal & moral right to subdue you on demand, to beat you at… Continue

...and what pray tell is the USA doing to improve the lot of mankind: torture, imprison, threaten, force suicide, impoverish, mass murder, assassinations, defraud. The USA consist of all who serve this fiendish government, all who aggressively exploit the death & suffering championed by USA's employees,operatives, agents, soldiers, and all who sit silently as the carnage and…

Eternal shame on cowardly global main street media for not providing coverage of fbi's murderous corruption that I chronicle; you perpetuate the macabre crimes against humanity that people need to know about.
http://www.sosbeevfbi.com/noticetomedia.html

The intel courts authorize torture, forced suicide, murder.  The judges should be prosecuted for crimes against humanity.

assassins of fbi join with thugs in congress

Comey again uses his 'sex crimes' cry in appeal to congress for even more authority to invade privacy.

The fbi already has the authority by its secret courts.

On April 30, 2013 *two cops came to my home at the direction of the fbi for the purpose of harassment, threats and intimidation. One of the men was Inspector Knipfing of the U.S. Postal Inspection (PI) service; the other was Rodriguez of the Texas Department of Public Safety (DPS). *[Trey Knipfing, Postal Inspector; Conrad Rodriguez, Texas DPS]

I later reported the unlawful invasion online at…

fbi, police and the general public are an emerging criminal enterprise 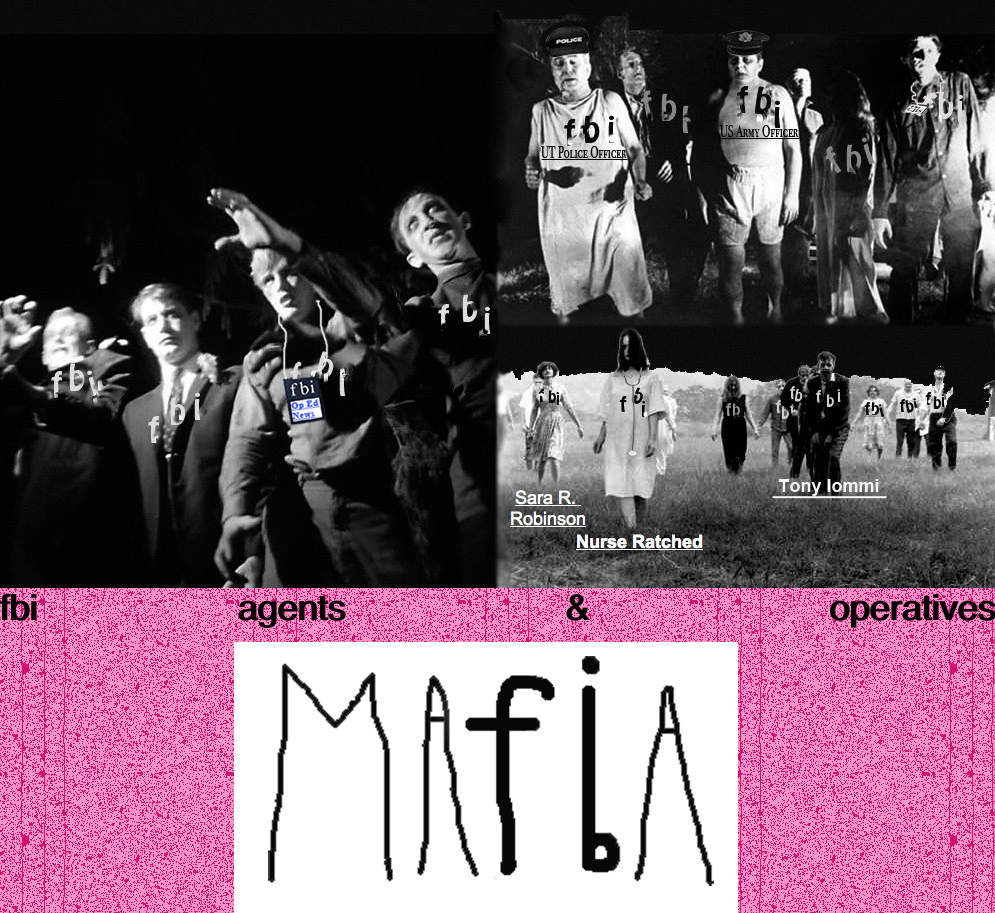 In order to more effectively envision the report that follows the reader is encouraged to see my paper at Academia (in the following link) on the topic of how the fbi corrupts society:

fbi,cia, congress are corrupt, do not represent the people

The people, not fbi/cia/congress, decide whether wars are just and battles worthwhile. In other words I and you decide.

Unimaginable corruption by fbi and their friends

Unimaginable corruption as fbi tortures, tries to kill me, commits unending string of crimes against me with 24/7 surveillance for 3 decades and then sends federal and state cops into my home to threaten me; the cops (Knipfing & Rodriguez) pretend that I am a suspect in a crime that they know was committed by the fbi.
To Knipfing and Rodriguez: you two are remembered as the laughing stock of usa's law enforcement community, as are the other fools at *UT Police who, on behalf of fbi,… Continue

Congress of USA Destroys Our Constitutional Government By Cowardice & Crimes

Understand the devastation of human rights globally  as perpetuated by usa's fbi,cia and condoned by their cowardly, creepy, colleagues & criminal cronies in congress.

fbi,cia use fear to control world

USA intel can *cause & measure fear and thereby predict and instill cowardice. In this manner people globally are converted as though with virus into operatives for assassins and are subdued by fear.The general population is in the grips of such a malaise.

See my reports on violence as a virus in the link below.The militancy of USA spreads like a virus around the world and into the hearts of many men globally.…

The fall of USA as a world leader

A number of forces contribute to the fall of the United States of America as a world leader and I explain separately the multi year process that allowed the legitimate government here to be overthrown by the intelligence services.1)

To my friends, associates & supporters wherever located: We embrace the terrible challenges closing in because that's what we have always done and because we know instinctively that our efforts will echo in the infinite spaces far beyond our time here for the eternal benefit of all mankind. Thank you for your heart from mine.

Thugs of cjis are nervous

The thugs at *cjis read this report today:


The violent subjugation of the world's people: *Why, **Wherefore and ***What can we do

* Because that's what we do


After 27 years of criminal assaults and torture of my person by the assassins of fbi, I have consulted with other attorneys and judges and now tentatively conclude that the secret federal intelligence (I.e. intel )court located in Washington D. C. provides the fbi,cia with blanket authority to engage in multiple heinous offenses against me and others  as I have documented in many of my reports like the * two referenced below dealing with murderous tyranny… Continue

Something is terribly wrong with our nation

Something is terribly wrong with the United States of America as I have *shown in activities of fbi,cia own torturers and assassins. These criminals in the fbi,cia  who have for 25 years, 24/7, hijacked my life,  wrecked my social and professional standing, and tried to kill me, now run around pointing an defamatory finger at the very person who reveals their unconscionable crimes. No greater irony in this century may be uncovered than this one: the usa, its fbi, cia, dod and other armed and… Continue

Recent criminal assaults and threats by intimidation have occurred in the public library where the officials stay out of sight  and allow the fbi operatives to do whatever they want. Previously, such officials actually participated in the harassment and provocation efforts.


Also bold vandalism of my vehicles cost thousands of dollars to repair and DEW assaults are now routinely extreme.

The world wide web has about one billion websites and the internet is 25 years old as of April, 2015.

My website which exposes fbi crimes ranks as follows according to *experts who track such statistics.

The violent subjugation of the world's people: *Why, **Wherefore and ***What can we do about it!
http://austin.indymedia.org/article/2015/03/13/murderous-tyranny-united-states-America
or:…
Continue